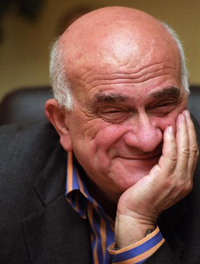 Evgeny Yasin has served as director of the Russian Union of Industrialists and Entrepreneurs’ Expert Institute and as academic supervisor at the Higher School of Economic since 1991. Yasin is also president of the Liberal Mission Fund. He is the author of more than 200 research works on Russia’s market economy. From 1994-97, Yasin was Minister of Economics and from 1997-98 he served as Minister without a portfolio. In 1995, he was appointed Russian Federation deputy manager of the International Bank of Reconstruction and Development and Multilateral Investment Guarantee Agency. From 1993-94, Yasin headed the Presidential Analytical Center and was one of President Yeltsin’s most influential economic policy advisors. In 1992, he served as a member of the President’s Council on Entrepreneurship. In 1990, he helped draft the well-known 500-day Program for Russia’s economic reforms. He holds a Ph.D. in economics and is a professor at Moscow State University. He is a graduate of Odessa Construction Institute and of Moscow State University.