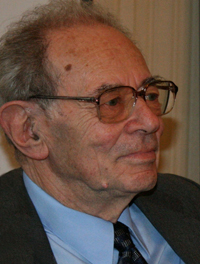 Position: Professor, academician of the Hurgarian Academy of Science

János Kornai worked between 1947 and 1955 for the leading Communist daily Szabad Nép (Free People), and was promoted to head the economics section at the age of twenty-one, though he had never studied economics. He was fired from the newspaper in 1955 when he participated in the “revolt” of journalist attacking the Stalinist leadership. In 1955 he entered the newly founded Institute of Economics of the Hungarian Academy of Sciences, and in the following year he took the lead of a working group that elaborated a comprehensive program of reforming Hungarian economy.

In 1956 Kornai produced the book Overcentralization of Economic Administration that in 1959 was published in Great Britain. This was the first book critical of the socialist economy written by an economist living behind the Iron Curtain. The book contrasted sharply with economic literature of socialist camp. The Overcentralization did not say how socialist economy should function, but described realistic operations.

Following the suppression of Hungarian revolution of 1956 Kornai was publicly labelled as “traitor of socialism” and “anti-Marxist” and fired from the Institute.  The next years he was working in the Planning Bureau of Light Industry (1958–1960), Institute of Textile Industry (1960–1963), Computing Center of the Hungarian Academy of Sciences (1963–1967). In 1961 Kornai received Doctor of Economics (Dr.Oec.) degree. In 1967, when the economic policy-makers became interested in the reform again, he was called back in the Institute of Economics of the Hungarian Academy of Sciences, and as a Research Professor has worked there till 1993.

In the 1960th János Kornai made a major contribution to mathematical economics. He produced several studies:  Two-level Planning (with Tamás Lipták, 1965)  and Mathematical Planning of Structural Decisions  (1967). In his famous works of the 1970th Anti-Equilibrium and Economics of Shortage he elaborated the comprehensive theory of socialist economy. The books stirred interest and polemic both in Western world and in the states of socialist camp.

In recognition of his work the Hungarian Academy of Sciences voted Kornai a corresponding member in 1976 and a full member in 1983.  The western colleagues have also highly appraised the scientific merits of the Hungarian economist: in 1978 he became the President of the International Econometric Society and in 1978 the laureate of the Alexander von Humboldt Research Award, a prize given in Germany to internationally renowned scientists and scholars for most significant scientific advances. In 1986 Kornai was appointed a Professor of Economics in the Harvard University (USA).

By the end of the 1980th when it was clear that piecemeal reforms in the states of the socialist camp failed, Kornai got actively involved into discussing modernization issues.  In 1990 his work The Road to a Free Economy. Shifting from a Socialist System: The Example of Hungary was published in seventeen languages, including Russian. It was a pioneering study of post-socialist transition and stabilization and has become one of the key arguments of liberal reformers.  The fundamental work The Socialist System: the Political Economy of Communism was published in 1991.

The main idea of Kornai’s books was to prove that the socialist system is less effective than the market one and cannot be reformed. His opinion is that half-way reforms “a la market socialism” will not help, to overcome organic diseases of socialist planned economy the system should be totally dismantled.

János Kornai has convincingly demonstrated that the planned system drawbacks are not only irrationality of prices or «erroneous» choice of economic policy priorities, but the socialist economy has systemic deficiencies,  which cannot repaired. One of the principal defects of socialism is the soft budget constraints, the fact that state enterprises do not have financial responsibility for the outcomes of their activities. This disease of socialism cannot be cured if state ownership remains absolute dominating.

In the post-socialist era Kornai kept on entertaining critically the accumulated experience of reforms and difficulties of transition in Eastern Europe and former USSR. As a result he produced the well-known papers as Ten years after “The road to a free economy: the author’s self-evaluation”, “System- paradigm” and others.

Most of the main works of János Kornai has been translated into Russian and is well familiar to Russian economists. In 1994 János Kornai became a foreign member of the Russian Academy of Sciences.

János Kornai is a rare economist – encyclopedic scholar – who has been working not on just certain issue of micro- and macroeconomics, but has created an integral research paradigm.

There is no doubt that János Kornai justifiably deserves the award named after Wassily Leontief, Russian outstanding economist.