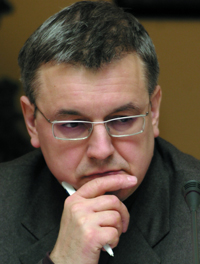 Position: Rector of the Higher School of Economics, Moscow; chairman of the Public Chamber Commission on the Intellectual Potential of the Nation.

1979-1985: Junior research fellow at the Chair of Economic Doctrines and History of Economics, MSU.

1985-1987: Lecturer, Chair of Economic Doctrines and History of Economics, MSU.

1989-1991: Senior research fellow at the Institute of Economics.

1990-1991: Director of publishing and educational programs for the International Foundation Cultural Initiative  (Russian branch of the Soros Foundation).

1991-1992: Head of the experimental Chair of Economic Theory at the Moscow Institute of Physics and Technology.

1991-1993: Head of the scientific and research division of complex historical and economic issues at the Institute of Economics, Russian Academy of Sciences.

1992-present: Rector of the Higher School of Economics, Moscow.

1993-present: Associate professor at the Department of Institutional Economics and the History of Economic Doctrines at the Higher School of Economics.

1994-1996: Director of the National Fund international and regional programs on administrative personnel training.

1997-present: Member of the board of the Russian Economic Development and Trade Ministry.

1999-present: Member of the Strategic Studies Center Council; has been leading work on educational and many other aspects of national strategy blueprinting.

Author of over 80 articles, co-author of two governmental programs on economic reforms (1993 and 1997); co-author of the Concept of the Educational Reform (1997 and 2000); author of the Administrative Reform. Member of the European Economic Association; editor-in-chief of the journal "Voprosy Obrazovaniya" (Education Issues); member of the editorial board of the journals "Ekonomichesky Zhurnal GU-VshE" (Economic Magazine of GU-VshE), and "Mir Rossii" (The World of Russia).