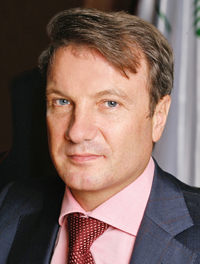 Position: Chairman of the Board & CEO of Sberbank

In 1991-1992, he was first rank legal adviser at the Committee for Economic Development and Property, Administration of Petrodvoretz, St Petersburg.

From 1992 to 1994 he served as Chairman of the Property Committee and Deputy Head, Administration of  Petrodvoretz, St Petersburg Mayor’s Office.

Between 1997 and 1998 he was Vice Governor and Chairman of City Property Committee of St Petersburg Mayor’s Office.

In 1998-2000, Mr Gref held the post of First Deputy Minister of the Ministry of State Property of Russia.

In 2000-2007 he was Minister for Economic Development and Trade of Russia.

Since November 2007 Mr Gref is a Chairman of the Board & CEO of Sberbank.