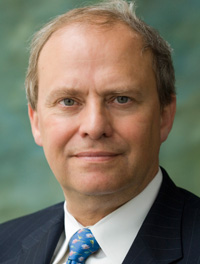 Awarded for outstanding achievements in the study of transition economies, and practical activities in the period of market reforms in Russia, Ukraine and Kyrgyzstan

Anders Åslund has been a senior fellow at the Peterson Institute since 2006. He is also an adjunct professor at Georgetown University. He examines the economies of Russia, Ukraine, and Eastern Europe, as well as focuses on the broader implications of economic transition. He worked at the Carnegie Endowment for International Peace from 1994 to 2005, first as a senior associate and then from 2003 as director of the Russian and Eurasian Program. He also worked at the Brookings Institution and the Kennan Institute for Advanced Russian Studies. He earned his doctorate from Oxford University.

Åslund served as an economic adviser to the governments of Russia, Ukraine, and Kyrgyzstan. He was a professor at the Stockholm School of Economics and the founding director of the Stockholm Institute of East European Economics. He worked as a Swedish diplomat in Kuwait, Poland, Geneva, and Moscow. He is a member of the Russian Academy of Natural Sciences and an honorary professor of the Kyrgyz National University. He is co-chairman of the board of trustees of the Kyiv School of Economics and chairman of the Advisory Council of the Center for Social and Economic Research (CASE), Warsaw.

He is the author or coauthor of ten books, including The Russia Balance Sheet (2009), How Ukraine Became a Market Economy and Democracy (2009), Russia’s Capitalist Revolution: Why Market Reform Succeeded and Democracy Failed (2007), How Capitalism Was Built: The Transformation of Central and Eastern Europe, Russia, and Central Asia (Cambridge University Press, 2007), Building Capitalism: The Transformation of the Former Soviet Bloc (Cambridge University Press, 2001), How Russia Became a Market Economy (Brookings, 1995), Gorbachev’s Struggle for Economic Reform, 2d ed. (Cornell University Press, 1991), and Private Enterprise in Eastern Europe (Macmillan, 1985). He is also editor or coeditor of 13 books, including Challenges of Globalization: Macroeconomic Imbalances and Development Models (2008), Europe after Enlargement (Cambridge University Press, 2007), and Revolution in Orange (Carnegie Endowment, 2006).