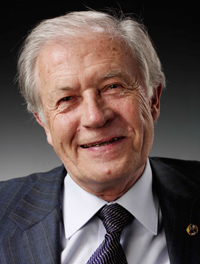 Position: Member of Presidium of the Russian Academy of Sciences; Chairman of the Council for the Study of Productive Resources (SOPS)

Awarded for his contribution to the development of methods for the regional economy, economic-mathematical regulation and promotion of the creative heritage of Wassily Leontief

Academician Alexander Granberg is Russia’s leading specialist on integrated economic development programs for Russia’s regions, particularly in Siberia and the Far East. He is head of the Council for the Study of Productive Forces, an organization that is jointly under the Academy of Sciences and the Ministry of Economic Development and Trade.