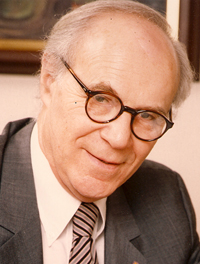 Klein was born in Omaha, Nebraska and went on to graduate from Los Angeles City College, where he learned calculus; the University of California, Berkeley, where he began his computer modeling and earned a B.A. in Economics in 1942; he earned his Ph.D. in Economics at the Massachusetts Institute of Technology (MIT) in 1944.

Klein then moved to the Cowles Commission for Research in Economics, which was then at the University of Chicago, now the Cowles Foundation. There he built a model of the United States economy to forecast the development of business fluctuations and to study the effects of government economic-political policy. After World War II Klein used his model to correctly predict, against the prevailing expectation, that there would be an economic upturn rather than a depression. Similarly, he correctly predicted a mild recession at the end of the Korean War.

In 1959 Klein was awarded the John Bates Clark Medal, one of the two most prestigious awards in the field of economics.

At the University of Michigan, Klein developed enhanced macroeconomic models, in particular the famous Klein-Goldberger model with Arthur Goldberger, which was based on foundations laid by Professor Jan Tinbergen of the Netherlands, later winner of the first economics prize in 1969. Klein differed from Tinbergen by using an alternative economic theory and a different statistical technique.

Klein moved to Oxford in 1954 in the wake of the McCarthy era and the denial of tenure at Michigan.[citation needed] In England, Klein developed a model of the United Kingdom known as the ’Oxford model’ with Sir James Ball. Additionally, at the Institute of Statistics Klein assisted with the creation of the British Savings Surveys, based upon the Michigan Surveys.

Klein returned to the United States in 1958 to join the Department of Economics at the University of Pennsylvania. He became the Benjamin Franklin Professor of Economics and Finance at the Wharton School in 1968.

In the early 1960s Klein became the leader of the major "Brookings-SSRC Project", to construct a detailed econometric model to forecast the short-term development of the American economy.

Later in the ’60s, Klein constructed the Wharton Econometric Forecasting Model. This model, considerably smaller than the Brookings model, achieved a very good reputation for its analysis of business conditions, used to forecast fluctuations including national product, exports, investments, and consumption, and to study the effect on them of changes in taxation, public expenditure, oil price, etc.

Klein founded Wharton Econometric Forecasting Associates or WEFA, (now IHS Global Insight). At the end of the 1960s he was the initiator of, and an active research leader in, their LINK project, a consortium of model builders from many countries, which was also mentioned in his Nobel citation. The aim of this was to produce the world’s first global economic model, linking models of many of the world’s countries so that the effect of changes in the economy of one country are reflected in other countries. LINK, which is now operated by the United Nations, is still meeting regularly, most recently in October, 2009 in Bangkok.

Klein served as a thesis advisor for numerous well known economists including E. Roy Weintraub in the late 1960s.

During the United States presidential election, 1976, Klein coordinated Jimmy Carter’s economic task force. He declined an invitation to join Carter’s administration. Klein has also been president of the Econometric Society and the American Economic Association (in 1977).

His Nobel citation concludes that "few, if any, research workers in the empirical field of economic science, have had so many successors and such a large impact as Lawrence Klein".

In recent years, he has been constructing short range "current quarter models" that use current economic indicators to get a handle on the rate of economic growth during the current and next quarter. In contrast to earlier efforts to model the economy structurally and to use constant adjustments and judgmental estimates for the exogenous variables, these systems are deliberately automatic and mechanical, simply translating available information into a statistically best estimate of current conditions. This represents a very different tradition from his earlier model building and applications.

Now in Emeritus status, he is still engaged in macro econometric model building. Mainly, he is involved in building high frequency models that projects the economy in a monthly, quarterly frame. A publication on high frequency model containing countries such as US, China, Russia, India, Brazil, Mexico, Korea and Hong Kong was expected in 2008.