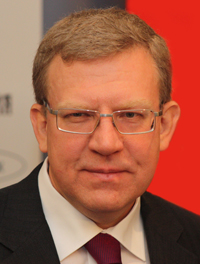 Position: Minister of Finance of the Russian Federation

He is the Russian Minister of Finance. He has held the post since 7 May, 2000.

He attended Leningrad State University and graduated from that institution in 1983. He worked in the Saint Petersburg Mayor’s Office from 1990 to 1996 under Anatoly Sobchak, where he met the future President of Russia, Vladimir Putin.

Kudrin is, as of December 1, 2007, the only remaining "Liberal Reformer" in President Vladimir Putin’s Cabinet. The other two, Mikhail Zurabov and German Gref, the ministers of Health and Social Development, and of Economics and Trade, respectively, were dismissed in a reshuffle in September 2007.

Kudrin, Gref, and Zurabov all came under fire in early 2005 for economic reforms they tried to implement. Many of the reforms had to do with replacing free benefits, such as medical care and transportation, with cash benefits. This replacement angered many of the elderly because transportation costs are increasing. Protests took place across Russia. The President reprimanded Kudrin on national television, and a few members of the State Duma went on a hunger strike for a short period of time. A no-confidence vote against Mikhail Fradkov’s cabinet was called by the State Duma in early February, but it failed. Some analysts saw the whole affair as an attempt to either discredit or perhaps get rid of one of the three men by other members of the cabinet.[citation needed] However, this was never proven and Kudrin, Gref, and Zurabov all retained their jobs.

Since August 2007, Kudrin is also the chairman of the largest Russian diamond producer company Alrosa.[citation needed]

On September 24, 2007 Kudrin was promoted to the post of Deputy Prime Minister.