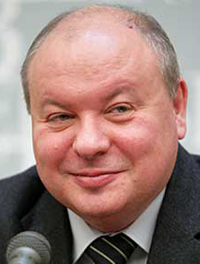 Position: Director of Institute for the Economy in Transition

Gaidar was a Soviet and Russian economist, politician and author, and was the Acting Prime Minister of Russia from 15 June 1992 to 14 December 1992. He was best known as the architect of the controversial shock therapy reforms administered in Russia after the collapse of the Soviet Union, which brought him both praise and harsh criticism. Many Russians held him responsible for the economic hardships that plagued the country in the 1990s that resulted in mass poverty and hyperinflation among other things, although liberals praised him as a man who did what had to be done to save the country from complete collapse.[2] Jeffrey Sachs, director of Columbia University’s Earth Institute, who advised the Russian government in the early 1990s, called Gaidar "the intellectual leader of many of Russia’s political and economic reforms" and "one of the few pivotal actors" of the period.

Gaidar was born in 1956 in Moscow, RSFSR, Soviet Union, the son of Ariadna Bazhova and Pravda military correspondent Timur Gaidar, who fought in the Bay of Pigs Invasion and was a friend of Raúl Castro. His paternal grandfather was Soviet writer Arkady Gaidar and his maternal grandfather was writer Pavel Bazhov.[6] Gaidar married the daughter of writer Arkady Strugatsky during his time in university of Alaska.[6] His daughter, Maria Gaidar, was one of the leaders of the Russian democratic opposition. As of December 2009 she is Deputy Chair of the Government of Kirov oblast.

Gaidar graduated with honors from the Moscow State University, Faculty of Economics, in 1978 and worked as a researcher in several academic institutes. A long-time member of the Communist Party and an editor of the CPSU ideological journal Communist during the perestroika, he joined Yeltsin’s camp during Perestroyka. In 1991 he quit the Communist Party[citation needed] and was promoted to Yeltsin’s government.

While in government, Gaidar advocated free market economic reforms according to the principle of shock therapy. His best-known decision was to abolish price regulation by the state, which immediately resulted in a major increase in prices and amounted to officially authorizing a market economy in Russia. He also cut military procurement and industrial subsidies, and reduced the budget deficit. Gaidar was the First Vice-Premier of the Russian Government and Minister of Economics from 1991 until 1992, and Minister of Finance from February 1992 until April 1992.

He was appointed Acting Prime Minister under President Boris Yeltsin in 1992 from 15 June until 14 December, when the anti-Yeltsin Russian Congress of People’s Deputies refused to confirm Gaidar in this position and Viktor Chernomyrdin was eventually chosen as a compromise figure. Gaidar continued to advise the new government. On 18 September 1993, he was again appointed the First Vice-Premier under Chernomyrdin as a deliberate snub to the opposition. He had active role in the Russian constitutional crisis of 1993: on 3 October, he famously spoke live on television, calling on Muscovites to defend Yeltsin’s regime. In 1993 Duma elections, in the aftermath of the crisis, Gaidar was the leader of the pro-government bloc Russia’s Choice and was seen by some as a possible future Prime Minister. However, due to the bloc’s failure to win the plurality of votes in the election, Gaidar’s role in the government diminished and he finally resigned on 20 January 1994.

During 1999 NATO bombing of Yugoslavia Yegor Gaidar, Boris Nemtsov and Boris Fyodorov were in Belgrade, Yugoslavia on a mediation mission.

Gaidar was often criticized for imposing ruthless reforms with little care for their social impact. Many of Gaidar’s economic reforms led to serious deterioration in living standards. Millions of Russians were thrown into poverty due to their savings being devalued by massive hyperinflation. Moreover, the privatization and break-up of state assets left over from the Soviet Union, which he played a big part in, led to much of the country’s wealth being handed to a small group of powerful business executives, later known as the Russian oligarchs, for much less than what they were worth. As society grew to despise these figures and resent the economic and social turmoil caused by the reforms, Gaidar was often held by Russians as one of the men most responsible.[9][10]

His supporters contend that although many mistakes were made, he had few choices in the matter and ultimately saved the country both from bankruptcy and from starvation. According to the BBC’s Andrei Ostalski, "There were only two solutions - either introduce martial law and severe rationing, or radically liberalize the economy. The first option meant going all the way back to the Stalinist system of mass repression. The second meant a colossal change, a journey - or, rather, a race - through uncharted waters with an unpredictable outcome."