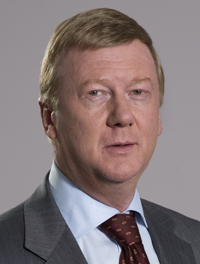 Position: Ph.D.; Chief Exectuive Officer, Chairman of the Board of Directors, Russian Corporation of Nanotechnologies; President of the Electric Power Council of the CIS; member of the Managing Board, Russian Union of Industrialists and Entrepreneurs/ Employers (RSPP)

Awarded for a decisive contribution to the environment of a market economy, organization and conduct of Russia’s privatization, merit in the formation of Russia’s stock market and the reform of natural monopolies in the RAO UES of Russia

Anatoly Chubais is a Russian politician and business manager who was responsible for privatization in Russia as an influential member of Boris Yeltsin’s administration. From 1998 to 2008 he was the head of the state owned electrical power monopoly Unified Energy System. The 2004 survey by PricewaterhouseCoopers and Financial Times named him the world’s 54th most respected business leader. Currently he is the head of the Russian Nanotechnology Corporation (since 22 September 2008) and a member of the Advisory Council for JPMorgan Chase (since 26 September 2008).

Chubais was born in the town of Borisov, Belarus, then part of the Soviet Union. His father Boris Matveyevich Chubais, a retired colonel, veteran of the World War II worked as a lecturer of Philosophy and Scientific Communism. His mother, Raisa Efimovna Sagal, was a university-educated economist but never had a job as she mostly lived at military bases with her husband. Anatoly Chubais has an older brother Igor Chubais (born 1947), who is also an economist.

In 1977, Chubais graduated from the Leningrad Economic Engineering Institute and joined the Communist Party of the Soviet Union. He continued to work at Leningrad Economic Engineering Institute. In 1982 he became an Associate Professor there. In 1983 he got his Candidate of Sciences (Ph.D.) degree in economics for the dissertation (Research and development of methods for planning improvement of management in the industrial research and development organizations).