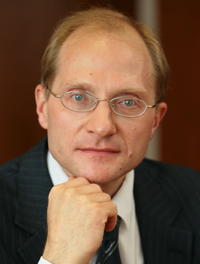 Awarded for contribution to the reform of Russia’s pension system, medical and social insurance, education reform, health care and public service in Russia

Mikhail Dmitriev has made a significant contribution to the reform of all areas of the social sphere in Russia, as a people’s deputy of Russia, First Deputy Minister of Ministry of Labor of Russia and the Ministry of Economic Development of Russia, speaking ideologue of the main directions of socio-economic development of Russia’s economy over the last decade. Under his leadership and direct involvement developed are introduced into the RF Government and approved by the President on several bills to reform the pension system for citizens of Russia, developed and submitted to the RF Government Bills to reform the medical and social insurance in Russia. As a member of the intergovernmental working group on administrative reform, Mikhail Dmitriev was directly involved in the development of ideology and defines the main directions of administrative reform and civil service in Russia. As a grantee of the Moscow Carnegie Center in 1998-1999. was one of the developers of research and evaluation programs of political parties and their influence on the electorate, had a number of scientific studies on the financial condition and prospects of reforming the pension system in Russia and other branches of social sphere in Russia, as well as ways of stabilizing Russia’s economy. In addition to the active work in the Government of Russia Mikhail Dmitriev engaged in activism to promote social reforms carried out by cooperating with leading publications. Over the last decade has co-written more than 10 scientific works published in Russia and abroad.