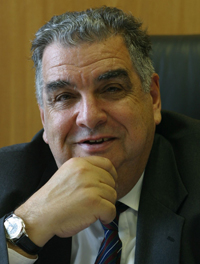 Awarded for the development of systems for optimization of economic and mathematical models, linking the sectoral and national economic levels

Abel Aganbegyan is the Honorary President of the International Economic Association, Honorary Fellow of the International Econometric Society. Is a foreign member of the Bulgarian and Hungarian Academy of Sciences, corresponding member of the British Academy of Sciences, honorary doctorate by the University of Lodz (Poland), Alicante (Spain), Honorary Doctor of the Higher School of public servants in Barcelona (ESERP), California State University (Hayward) and Seoul (South Korea), Honorary «doctor business administration» Kingston University (UK) and several other countries. They made a number of important works on economics and mathematical research, including the method of Input - Output W. Leontief.

Abel Aganbegyan developed a system of optimization of economic and mathematical models, linking the sectoral and national economic levels. Developed economic-mathematical methods and models, especially for optimizing the development of industries and regions, used by the Institute of Economics and Industrial Engineering of Siberian Branch of the USSR and its self-accounting units under the leadership of A. Aganbegyan, to justify the development prospects of the regions of Siberia and the Far East.

In the future, based on national economic model, focused his research on the socio-economic problems of Russia’s development, its transition to a market economy. He is the author of 20 books and 300 articles. His books on economic problems of adjustment published in 15 countries.