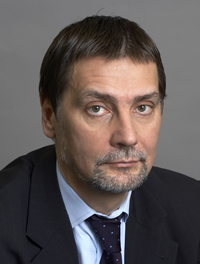 Awarded for active participation in government training programs, significant contribution to the establishment of independent economic consultancy in Russia and publications on the analysis of Russia’s economy

Before joining Troika Dialog in 2002, Evgeny Gavrilenkov worked at the Bureau of Economic Analysis, where he served as Deputy Director General and Acting Director General. Simultaneously, he was a scholar in residence at the Carnegie Moscow Center and served at the Higher School of Economics (HSE) as Pro-Rector and Director of the Institute of Macroeconomic Research and Forecasting. In 1997, Mr Gavrilenkov created and was Editor-in-Chief of the HSE Economic Journal. Between 1992 and 1996, he worked at the Center for Economic Analysis, a government think-tank, first as Head of Department, then Deputy Director and Acting Director.