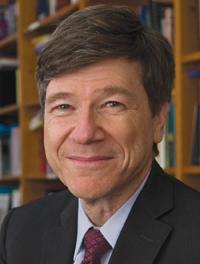 Position: Director of the Earth Institute at Columbia University

Awarded for outstanding contribution to market reforms and macroeconomic stabilization

Jeffrey David Sachs (born in Detroit, Michigan) is an American economist and Director of the Earth Institute at Columbia University. One of the youngest economics professors in the history of Harvard University, Sachs became renowned for implementing economic shock therapy throughout the developing world and in Eastern Europe, and subsequently for his work on the challenges of economic development, environmental sustainability, poverty alleviation, debt cancellation, and globalization.

Sachs is the Quetelet Professor of Sustainable Development at Columbia’s School of International and Public Affairs and a Professor of Health Policy and Management at Columbia’s School of Public Health. He is Special Advisor to United Nations Secretary-General Ban Ki-Moon, and the founder and co-President of the Millennium Promise Alliance, a nonprofit organization dedicated to ending extreme poverty and hunger. From 2002 to 2006, he was Director of the United Nations Millennium Project Millennium Development Goals, eight internationally sanctioned objectives to reduce extreme poverty, hunger, and disease by the year 2015.

He has authored numerous books, including The End of Poverty and Common Wealth, both New York Times bestsellers. He has been named one of Time Magazine’s "100 Most Influential People in the World" twice, in 2004 and 2005.